A friend once referred to me as a Renaissance woman as I delve into all the “gentle” arts.

Thus said, it is both a need and great pleasure to be creative, whether painting, singing or making a colourful garden. It’s what I do. I have been a painter for over 30 yrs, during and after a career as a coloratura soprano. What a great combination!

Music is such an integral part of my creative process. My singing venues included: Opera Hamilton, The Shaw Festival, Niagara on the Lake, Cardiff, and Morriston, Wales and London, England to mention a few locations on a tour of England and Wales, as well as many locations in southern Ontario, including the 4th Line Theatre here in Northumberland.

I started to pursue a career as an artist when we moved to Northumberland. 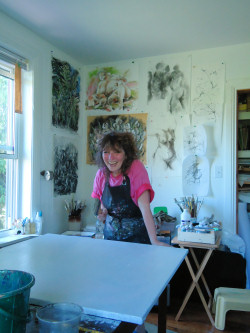 Primarily self taught, I worked first as a watercolourist, switching to acrylic and other mediums as my painting style evolved. I now enjoy the multifaceted effects I can achieve with the use of different materials, and surfaces. I no longer feel inhibited by a choice of medium and it permits me to explore and experiment, which is such a part of my painting process. My work has been exhibited locally throughout Northumberland County and southern Ontario, and it can be found in private collections in England, Holland, Germany, the US, Australia and Canada. I occasionally conduct classes at my studio for children and adults. I also welcome visitors to my studio and gardens by appointment only. Please call 905-373-3661 or visit my contact page for more information.